Your Favorites Reads of 2018 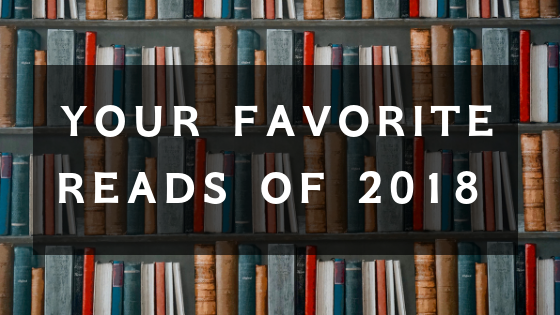 We asked, what was the best book you read in 2018? Here’s what you had to say! Thank you to everyone who shared their favorite read with us at the library and on social media!

We’re Going to Need More Wine: Stories that are Funny, Complicated, and True by Gabrielle Union
Union writes with such heart and energy that it really does feel like she’s talking to you while you share one (or several) bottles of wine. She touches on so many topics, including infidelity, women’s sexual health, and teaching young black men to protect themselves in a world that fears them.
Factfulness: Ten Reasons We’re Wrong about the World–and Why Things are Better than you Think by Hans Rosling
Inspiring and revelatory, this is a book of stories by a late legend, for anyone who wants to really understand the world. It is based on a lifetime trying to teach a fact-based worldview, and of listening to how people misinterpret and overdramatize the facts even when they are right there in front of them.
Fear: Trump in the White House by Bob Woodward
Draws on interviews with firsthand sources, meeting notes, personal diaries, and other documents to depict life in the Trump White House, focusing on Trump’s decision-making process for foreign and domestic policies. 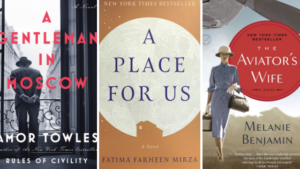 A Gentleman in Moscow by Amor Towles
Deemed unrepentant by a Bolshevik tribunal in 1922, Count Alexander Rostov is sentenced to house arrest in a hotel across the street from the Kremlin, where he lives in an attic room while some of the most tumultuous decades in Russian history unfold.
A Place for Us by Fatima Farheen Mirza
A family caught between two cultures yields a resonant story of faith, tradition, identity and belonging.
The Aviator’s Wife by Melanie Benjamin
A story inspired by the marriage between Charles and Anne Morrow Lindbergh traces the romance between a handsome young aviator and a shy ambassador’s daughter whose relationship is marked by wild international acclaim. 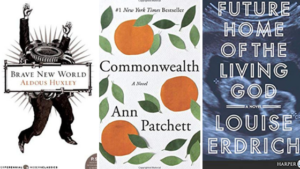 Brave New World by Aldous Huxley
Cloning, feel-good drugs, anti-aging programs, and total social control through politics, programming and media–has Aldous Huxley accurately predicted our future? With a storyteller’s genius, he weaves these ethical controversies in a compelling narrative that dawns in the year 632 A.F. (After Ford, the deity). When Lenina and Bernard visit a savage reservation, we experience how Utopia can destroy humanity.
Commonwealth by Ann Patchett
A family drama that perfectly captures both the absurdity and the heartbreak of domestic life.
Future Home of the Living God by Louise Erdrich
Explores the possibility of evolution reversing and is told from the perspective of a pregnant woman who is writing a journal to her unborn child. Along the way we meet her adoptive parents, her birth mother, and she reports on society unraveling and detaining pregnant women. 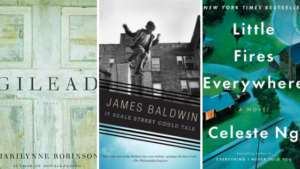 Gilead by Marilynne Robinson
As the Reverend John Ames approaches the hour of his own death, he writes a letter to his son chronicling three previous generations of his family, a story that stretches back to the Civil War and reveals uncomfortable family secrets.
If Beale Street Could Talk by James Baldwin
When a pregnant Tish’s boyfriend Fonny, a sculptor, is wrongfully jailed for the rape of a Puerto Rican woman, their families unite to prove the charge false.
Little Fires Everywhere by Celeste Ng
Ugliness seethes under a placid suburban surface in this multilayered novel, in which two families grow too close for comfort. Itinerant artist Mia and her teenage daughter Pearl rent a Shaker Heights, Ohio, house from the Richardson’s, who have four kids around Pearl’s age. Three of the four become Pearl’s constant companions; the fourth becomes Mia’s. A custody suit elsewhere in the community threatens everything…Told backwards through time via multiple narrators, this insightful book will appeal to fans of complex family dramas. 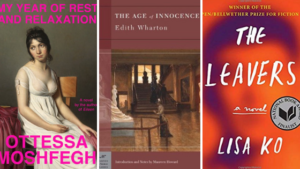 My Year of Rest and Relaxation by Ottesa Moshfegh
After losing her parents, a young college graduate in New York City spends a year alienating the world under the influence of a crazy combination of drugs.
The Age of Innocence by Edith Wharton
Engaged to marry socialite May Welland, Newland Archer meets Countess Ellen Olenska, a woman unbound by convention and surrounded by scandal, and is forced to decide between happiness and the social code that has ruled his life.
The Leavers by Lisa Ko
One morning, eleven-year-old Deming Guo’s mother, an undocumented Chinese immigrant named Polly, goes to her job and never comes home. Deming is eventually adopted by two white college professors who move him from the Bronx to a small town. This is a poignant story of a boy who struggles to find his footing in a new world. It’s also an unflinching look at the difficult decisions a mother faces. 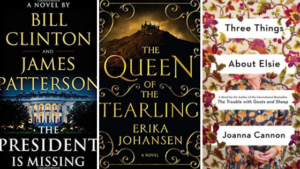 The President is Missing by Bill Clinton and James Patterson
A sitting U.S. President is missing. President Bill Clinton partners with #1 bestselling author James Patterson in a powerful, one-of-a-kind thriller filled with the kind of insider details that only a President can know
The Queen of Tearling by Erika Johansen
The first of a trilogy, this book is so much more than just another fantasy. Yes, there is magic, a princess and a really bad queen, but there is also an apocalyptic twist that makes readers hungry for the next installment.
Three Things About Elsie by Joanna Cannon
Presents the story of an injured woman who meditates on her complicated relationship with a best friend when a man they believed was dead joins her retirement community. 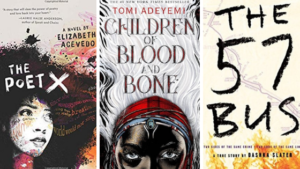 The Poet X by Elizabeth Acevedo
A stunning account of a teen girl’s path to poetry. Sophomore Xiomara Batista is simultaneously invisible and hyper-visible at home, at school, and in her largely Dominican community in Harlem.
Children of Blood and Bone by Tomi Adeyemi
Zelie Adebola remembers when the soil of Orisha hummed with magic. Burners ignited flames, Tiders beckoned waves, and Zelie’s Reaper mother summoned forth souls. A tale of reclaiming land, magic, and power.
The 57 Bus by Dashka Slater
Tells the true story of an agender teen who was set on fire by another teen while riding a bus in Oakland, a crime that focuses on the concepts of race, class, gender, crime, and punishment. 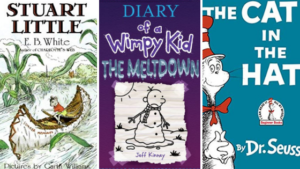 Stuart Little by E. B. White
The adventures of the debonair mouse Stuart Little as he sets out in the world to seek out his dearest friend, a little bird that stayed for a few days in his family’s garden.

The Diary of a Wimpy Kid: The Meltdown by Jeff Kinney
When snow shuts down Greg Heffley’s middle school, his neighborhood transforms into a wintry battlefield. Rival groups fight over territory, build massive snow forts, and stage epic snowball fights. And in the crosshairs are Greg and his trusty best friend, Rowley Jefferson. It’s a fight for survival as Greg and Rowley navigate alliances, betrayals, and warring gangs in a neighborhood meltdown. When the snow clears, will Greg and Rowley emerge as heroes? Or will they even survive to see another day?
The Cat in the Hat by Dr. Seuss
Two children sitting at home on a rainy day are visited by the Cat in the Hat who shows them some tricks and games. 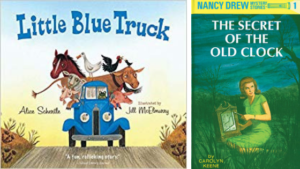 Little Blue Truck by Alice Schertle
A small blue truck finds his way out of a jam, with a little help from his friends.
Nancy Drew by Carolyn Keene
Nancy Drew’s keen mind is tested when she searches for a missing will.