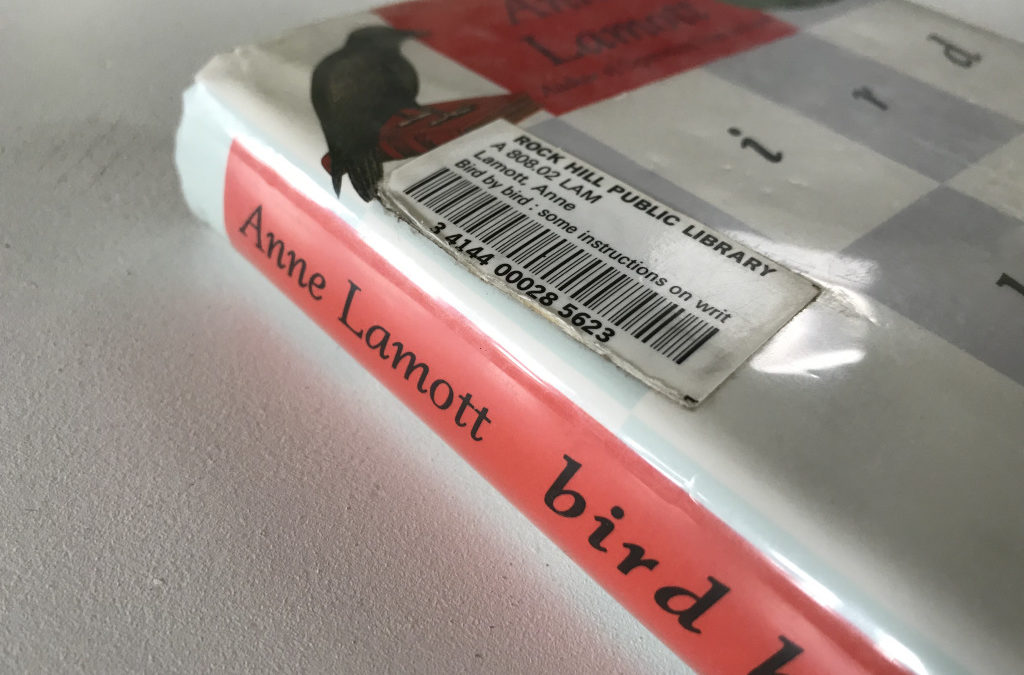 Enjoy this post from our guest contributor, John Shoulberg. John currently serves as the President of the Library Board of Trustees and runs his own blog. What books have you enjoyed rereading? Let us know in the comments!

I’m rereading Bird By Bird, a book by Anne Lamott. The subtitle is “Some Instructions About Writing and Life.”
Lamott is a writer and writing teacher who lives in California, somewhat neurotic, very funny and a good follow on Facebook. This book is about what it means to be a writer—the work and mindset involved. It’s an enjoyable read.
And yes, I said rereading. I read this book once before, back in the 1990s, shortly after it was published. I checked it out from the Rock Hill Public Library, and enjoyed it then, as well. I guess I always figured I’d read it again some day, but I didn’t know that day would be 20 years later.
The copy I’m rereading now is also checked out from the Rock Hill Public Library, and it’s almost certainly the same copy from two decades ago. There’s a coffee stain on the edges of all of the pages (I swear I’m not responsible, because honest to god I would remember if I had done that, even 20 years ago), and it has that otherwise-gently-worn feel to it. There are two barcode tags, one from a previous computer cataloging system.
The thing is, even though it’s certainly the same book, the library it came from is now in it’s third location since the 1990s. Back then, the library was co-located with the Rock Hill City Hall. But that property was sold to developers and the building was torn down, so the library had to move up the street to another spot, a leased location in a strip mall. That lasted about 10 years, until the library finally found a building it could purchase, even further up Manchester Road. That one opened in 2012, and it looks like it will be the permanent home of the Rock Hill Public Library.
So, same book, three different library locations.
This is actually the second writing-related book I am rereading this year. The first was Writing Down The Bones by Natalie Goldberg (and, serendipitously enough, Lamott makes reference to Goldberg fairly early in Bird By Bird.). Maybe this is my Year Of Rereading Writing Books.
There are a couple of other books I want to reread, though, that are not writing-related. One is Younger Next Year, by Chris Crowley and Henry Lodge, because I must have missed something when I read it the first time about seven years ago, since I definitely haven’t felt younger any year since then. (OK, to be honest, the only thing I missed was the discipline—my fault, not the book’s.) The other is A Month Of Sundays by John Updike, which, in retrospect, was probably my favorite Updike novel, and I want to read it again and see if I was correct in that supposition.
It got me to thinking about rereading books. In all my adult life, I’ll bet I haven’t reread more than a half-dozen books. And yet, I love books, and I have definitely read a number of books over the years that would be worth taking a second look at. I guess what happens, though, is that there are so many, many more unread books to explore, that it’s difficult to justify the time it would take to re-experience a book I’ve already read.
So when I reread a book now, it: a) will be a book that I really, really loved the first time; and b) will be a book that I want to relearn the essential lessons of. For a novel, such as Updike’s, an additional reason to reread it will be that I want to revisit the sumptuous prose and see if, the second time around,  I can learn something from his writing style.
I generally don’t actively solicit comments in this blog, but I’m somewhat curious: what books have you reread, and why? What books do you plan to reread?
Originally posted: https://johnshoulberg.wordpress.com/2018/06/26/rereading/