Guest Post: A Review of “The Good Lord Bird”

Enjoy this guest post from our anonymous contributor! Check back throughout the month of February to see reviews of books written by and about African-Americans. 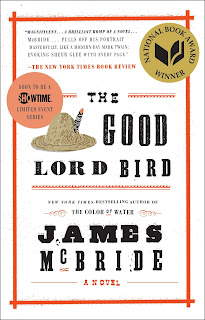 The Good Lord Bird by James McBride is a fictional retelling of the last days of the notorious abolitionist, John Brown. Young Henry Shackleford, a young slave whose father Brown kills and renames Onion, joins Brown and his loosely-knit band of followers through the Kansas territory just prior to the Civil War.

Because Brown thinks Henry’s name is really Henrietta, Onion is forced to conceal his true gender. Brown believes Onion to be his good luck charm, but he is no defense against federal forces who captured Brown at the arsenal in Harper’s Ferry, Virginia, in 1859.

Onion matures in many ways throughout the novel. He tries to understand how to reconcile Brown’s antislavery position with his violent nature. Onion matures physically and struggles with how he feels growing into adulthood while protecting his identity.

The Good Lord Bird is a remarkable adventure about a violent character in turbulent times, but it is told with humor and compassion as well.