Get the Lowdown on Dino O”Dell 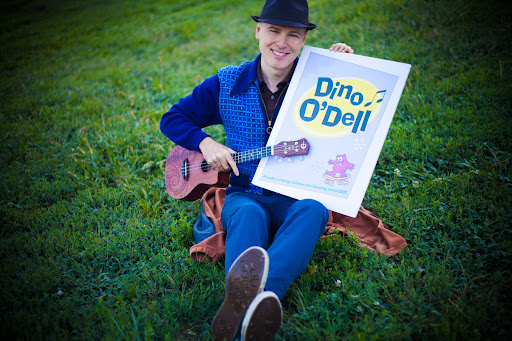 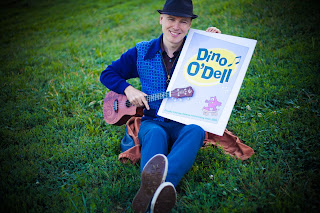 Source: dinoodell.com
We had the great pleasure of speaking with family-friendly entertainer Dino O’Dell about performing, future projects, and more! Read on to learn more about Dino.
Want to see him perform live? You’re in luck! Dino will be in Oakhaven Park (1137 Gilbert Avenue) October 26 at 6 PM to perform his spooktacular Not-So-Scary Halloween Show! Get there before the show at 5:30 PM for a Tombstone Candy Hunt and craft courtesy of the Rock Hill Parks and Recreation Department. Costumes encouraged! Learn more about our free show at rockhillpubliclibrary.org/calendar
________________________________________________
RHPL: What inspired the switch from music teacher to family entertainer?
DINO: I still consider myself a teacher, but with the luxury of time. I will spend 100 hours planning one 45 minute show. Usually a teacher is lucky to have 20 minutes of planning for an hour long lesson. Of course, I can only spend that amount of time on planning because I perform for 150 students at a time and I get to perform it several hundred times. The pay off, for me, is immense.
To find a job that utilizes stories and songs as the medium for education is a lucky turn of events, and it plays to my strengths as a teacher!
RHPL: I’m sure you love all your shows, but are there any shows that you have the most fun performing?
DINO: My favorite shows are my outer-space science show (Meteorites, Moons and the Milky Way) or my geography show (Around the World.) I like the structure of those shows. By the end of 45 minutes, the kids know the melody, the lyrics, a clapping part, and dance moves. And, even better, the lyrics and the dance moves all are connected to the content of the show, so they are simultaneously learning, singing and dancing—that’s a win-win! 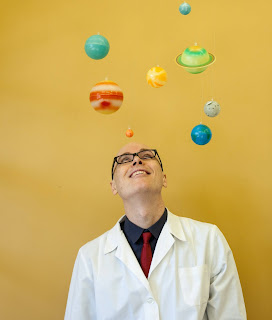 Source: dinoodell.com
RHPL: What are you reading right now?
DINO: I am reading The One and Only Ivan [by Katherine Applegate] right now. The book is about a silverback gorilla named Ivan and his friends, and I am really enjoying it.
RHPL: What makes you laugh the most?
DINO: My son. He is eleven and is on the edge of obnoxious comedy—sometimes I’m definitely not laughing—but on a good day he reminds of a real-life version of Calvin and Hobbes.
RHPL: How has your approach to performing changed over the years? Is there anything that’s stayed the same throughout your career?
DINO: The thing that has stayed the same is my emphasis on interaction, but sometimes interactions can become overly complex. I have learned that a melody is charming in and of itself. Music does have a kind of magic to it, so I’ve learned to leave room for the magic of music.
RHPL: If you could choose, which kind of dinosaur would you be?
DINO: The brachiosaurus is always pictured eating while wading in the water with young brachiosauruses nearby. I like the family image and it’s great to go swimming when it’s hot.
I might also choose to be a huge dragonfly. Dragonflies are beautiful and fascinating to me. So much so, I wrote a song about them! Back in the Paleozoic and Mesozoic ages, the dragonflies were HUGE. They are as large as a finger nowadays, but back then they were as big as your forearm.
RHPL: What can your fans look forward to from you in the coming months or years? Anything in the works?
DINO: There are several projects coming up! There is a new CD that I’ve collaborated on with children’s musicians from around the country; St. Louis’ own, Babaloo, will be singing on it.
I’m also putting together a YouTube series called Book-Detective for those that are just beginning to learn their alphabet and are in the process of learning to read. 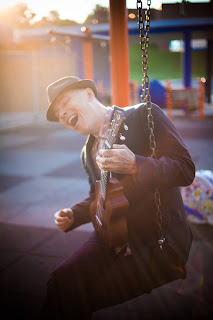