Black History Month is here! February is dedicated to celebrating the contributions Black Americans have made throughout history, and Rock Hill is doing our part by highlighting notable Black authors. Check back every week in February to find new posts. This week, read about young adult author Angie Thomas! 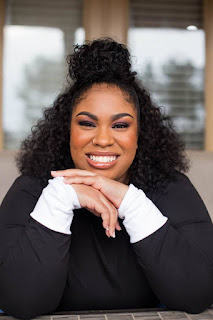 Angie Thomas was born and raised in Jackson, Mississippi. She began writing at a young age and credits her mother with jumpstarting her decades-long infatuation with books as she always encouraged her daughter to read. Thomas says that, upon witnessing a shooting at the tender age of six, her mother took her to the library the next day to show that there was more to the world than what young Angie had witnessed. That same year, she wrote her very first story.
Thomas dabbled as a rapper in her teen years, but writing remained her primary focus. She became the first Black teenager to graduate from her creative writing course and went on to get a Bachelor of Fine Arts in Creative Writing from Belhaven University.
While in college, Thomas began writing what would eventually become her debut novel. Following the shooting death of an unarmed Black man, Thomas wrote a short story to work through some of her pain. .
Thomas picked up the project again a few years later upon news of even more deaths of unarmed Black people, which became a major influence on her work. One of her professors encouraged her to turn “The Hate U Give” into a full-length novel and give a voice to young people whose stories are rarely told. She won the Walter Dean Myers Grant in 2015, awarded by We Need Diverse Books, and used the grant money to finish her novel.

“The Hate U Give” was released in 2017 and soared to the top of the New York Times Best Seller list one week after its release. The book won multiple prestigious awards, including the Michael L. Printz award, Coretta Scott King award, and William C. Morris award. “The Hate U Give” was adapted into a movie with the same name in 2018.

Since the success of her debut novel, Thomas has written two more books within the “The Hate U Give” universe in 2019 and 2021. She also co-authored a YA novel with other prominent Black YA authors in 2021.

Fans of Angie Thomas will be excited to know that there is a movie adaptation in the works for “On the Come Up” and other projects as well! Check out books by Angie Thomas or the movie version of “The Hate U Give” from the library, or place a hold on our website.
Sources:
https://angiethomas.com/about/
https://www.publishersweekly.com/pw/by-topic/childrens/childrens-authors/article/72805-q-a-with-angie-thomas.html
https://www.telegraph.co.uk/books/authors/meet-angie-thomas-author-new-ya-sensation-inspired-black-lives/
https://angiethomas.com/movies/